Dan Cornege has over 15 years of experience in animal and plant pest management. Running his successful business Agri Pest NZ out of Tahou he has worked with numerous local landowners helping them to restore and rid their properties of invasive plants and pests.

Dan was one of the first trappers to claim their $20 reward for a humanely caught ferret in conjunction with the Forest Bridge Trusts September catch a ferret campaign.

Ferrets were introduced to New Zealand in the 1900s and have gone on to become a significant threat to native birds such as kiwi so we were delighted that Dan was able to rid the Tahou area of one of these elusive mustelid predators last month.

Dan took the time to tell us more about how he caught his ferret, 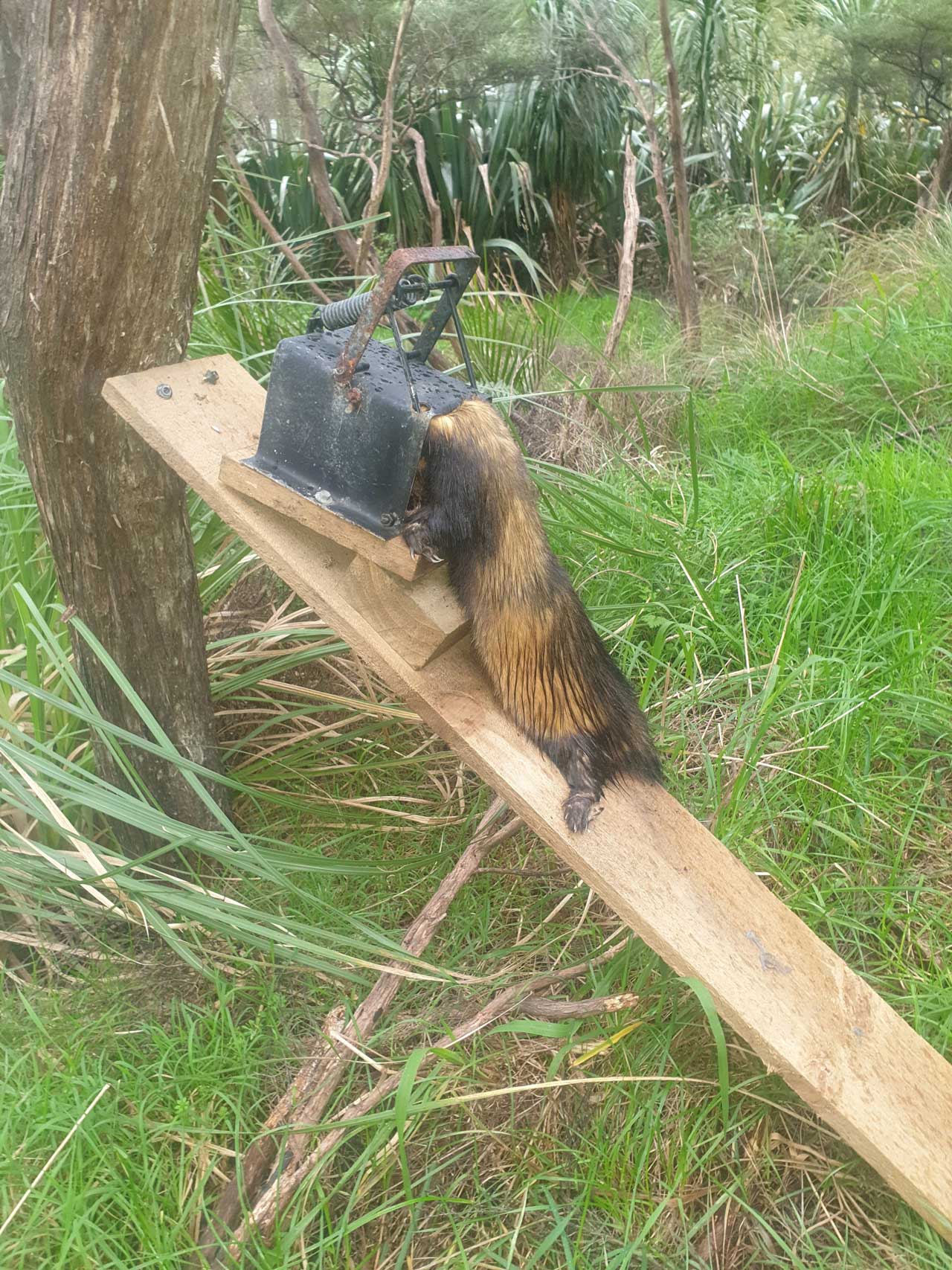 TFBT: What lure did you use to attract the ferret?

Dan: Salted hare, I normally use salted rabbit pieces but I have been shooting more hares than rabbits lately, so I thought I’d try it out, and it works!

TFBT: Where did you have the trap positioned?

Dan: Near a creek in a large valley of native bush.

TFBT: What type of trap did you use to catch it?

Dan: It was caught in a SA2 Kat Trap.

TFBT: Were you aware that it was there before you caught it or was it a fluke?

Dan: No, I wasn’t aware ferrets were present. I have been trapping this block for several years using DOC200 traps and just recently installed a few SA’s and DOC250 traps supplied by the FBT. I have caught plenty of stoats, weasels, rats etc but got the ferret within weeks of installing the new traps which was great.

TFBT: What are the signs that you might have a ferret on your property?

Dan: Ferrets have been known to attack and kill chickens in their coop. Also, you may notice a pile of feathers where a bird has been eaten or a dead rabbit that has only been partially consumed.

TFBT: What do Ferrets prey upon, and why are they a significant threat to local wildlife?

Dan: Ferrets mostly prey on rabbits and hares, but if they are in short supply, they will supplement their diet with rats and native birds, including kiwi. The ferret was caught less than 2km from the Mataia boundary and with kiwi now stretching their legs out of Mataia, it is crucial that ferrets are controlled.

TFBT: How long have you worked in pest management?

Dan: I have worked in pest management for over 15 years now, 10 years for a large company and 5 years as my own business (Agri Pest NZ). Agri Pest NZ is involved in multiple aspects of ecological restoration, with animal pest control and weed control being the main focus.

TFBT: Why did you get started in this line of work?

Dan: I have always loved working outdoors, after leaving school I did 7 years in forestry then for a change I left and joined a company doing large-scale possum control and never looked back.

TFBT: What do you enjoy most about your job?

Dan: The freedom it gives me, the amazing views, and sights, meeting new people, and the satisfaction that my work is benefiting our native wildlife.

TFBT: What should people do first if they are concerned about an increase in pests (animal or plant) on their property?

Dan: They can either call or send me an email regarding their concerns, I am happy to give advice or quotes for work to be done.

Many Thanks to Dan Cornege. Find out how The Forest Bridge Trust can help you with predator control.