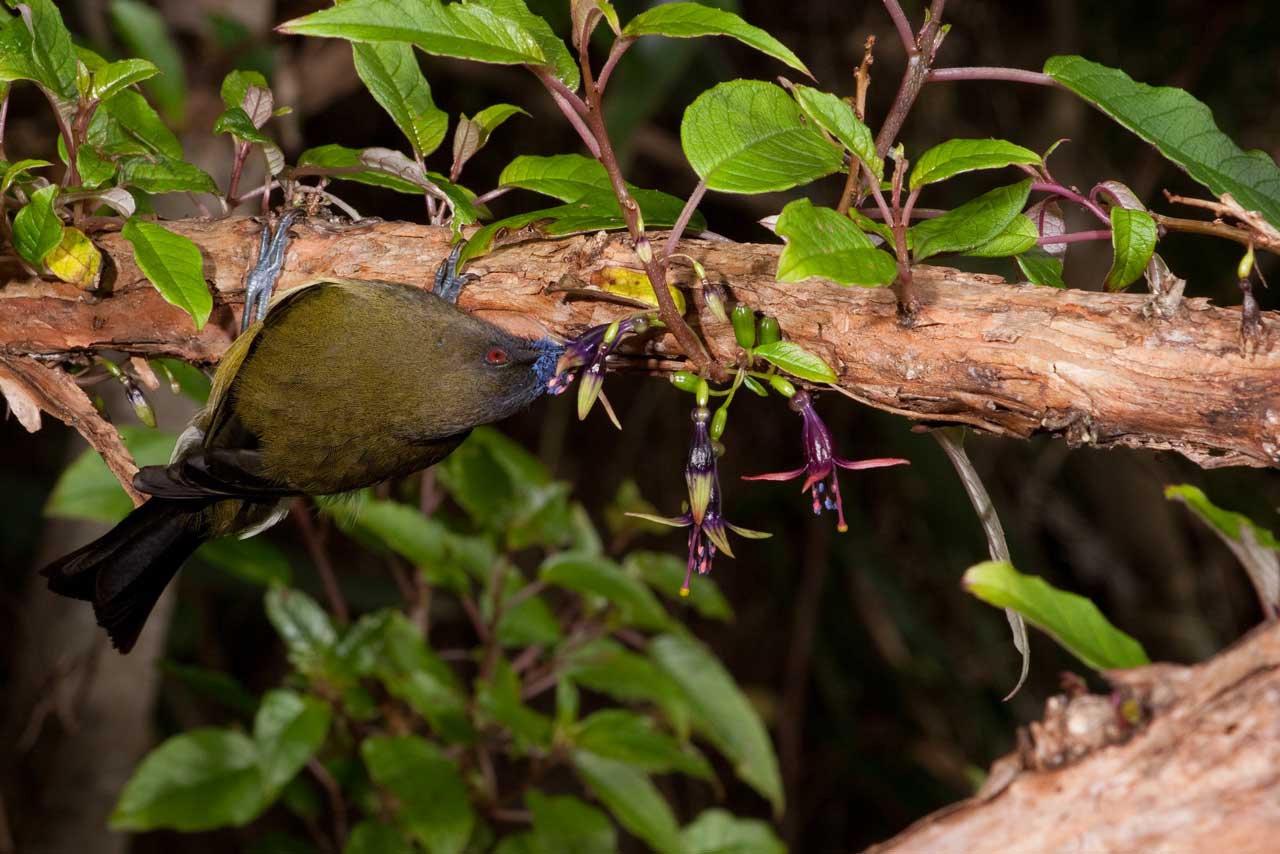 The Forest Bridge Trust have been thrilled to receive reports of bellbirds being heard and sighted in the Rodney area over the past few months.

“I’m absolutely thrilled to be able to let you know that for the first time in 20 years korimako/bellbird are now around our house, feeding confidently on the native plants in our garden, and beyond”Matakana resident

It is hoped that bellbirds are establishing permanent territories in areas where they have previously been only seasonal visitors.

Being fast-moving and well-camouflaged it is not always easy to spot a bellbird. They are about 20cm long, olive, and black in colouring, with red eyes. Only males have a purple head while females can be identified by a narrow pale stripe from the bill below the eye.

Before you sight a bellbird, you might first become aware of its distinctive call. Captain Cook described them as sounding “like small bells exquisitely tuned”. A bellbird call is like a Tui’s, but with a less guttural tone. Unusually both female and male bellbirds sing, although at this time of the year it will likely be the male territorial call that you hear.

Bellbirds have a brush-like tongue that allows them to reach deeply into flowers, they are drawn to native nectar sources such as Puriri, Kowhai, and Tree Fuchsia and exotics such as bottlebrush and banksia. However, if Tui is also present, bellbird will be driven off the nectar resource and may move on to where they can feed without being harassed.

Bellbirds travel great distances, which could explain recent sightings from Warkworth to as far north as Mangawhai. The newer bellbirds to our region have likely come from predator-free areas such as Tawharanui, Little Barrier and Hen Island. A significant self-reintroduction occurred in 2005 when over 100 bellbirds suddenly arrived at Tawharanui – they had been absent from Northland since the 1850s. It was thought that they had flown 23km from Te Hauturu-o-Toi / Little Barrier Island soon after the building of the Predator Proof fence at Tawharanui.

It is believed that the song of the bellbird varies from region to region. Just as with human languages, studies have shown that different populations of bellbirds have different song dialects, and this is how ecologists can determine where bellbirds have originated from.

It’s worth remembering that bellbirds play an essential role in pollinating the flowers of native trees and shrubs, so it is of great benefit to us all to have them stay in the Rodney area.

Preferring to nest in dense foliage these beautiful songbirds are vulnerable to predation from Ship Rats, so we encourage you to set a trap on your property to help keep native birds like bellbirds safe. The Forest Bridge Trusts, Community Liaison and Predator Control team can help you get started with trapping or you can volunteer to help us maintain trap lines in the Rodney area. See the website for details